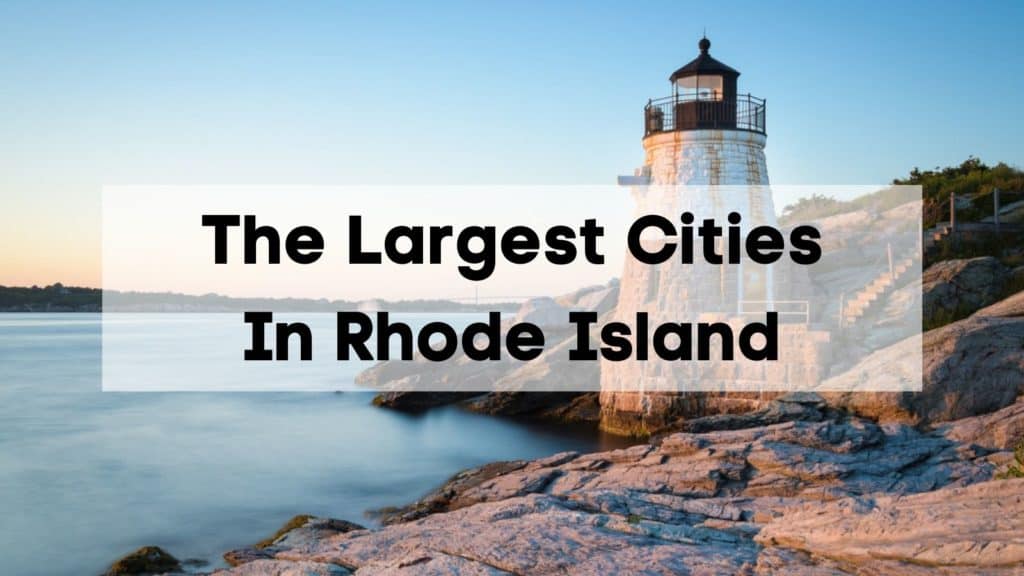 Rhode Island is famous for sandy beaches and Colonial seaside towns. From large cities to small townships, Rhode Island has a perfect city for you when you’re ready to move. Although Rhode Island is the smallest U.S. state by area and ranked forty-third in population, it’s the second-most densely populated state behind New Jersey. It’s nicknamed the “Ocean State” due to a large amount of bays and inlets that make up about 14% of its area.

If you’re looking to move to Rhode Island, you’ll have 39 unique cities and towns to choose from, as well as a number of smaller villages. Whether you’re seeking big city life or a quiet, seaside town, Rhode Island has the right city for you and your family. This data comes from the US Census. Look through our list of the 10 largest cities in Rhode Island to decide which one is the best fit for you.

Which of the Largest Cities in Rhode Island is Right for You?

Providence is the main city in Rhode Island as well as the state capital. It’s also one of the oldest cities in the United States, founded in 1636. Providence lies at the mouth of the Providence River at Narragansett Bay. Originally noted for manufacturing metals, machinery, textiles, jewelry, and silverware, today Providence includes eight hospitals and seven institutions of higher learning, making a shift from manufacturing to the knowledge and service industries.

Providence is a regional hub for the U.S. Postal Service. Prominent companies based here include Textron, United Natural Foods, Nortek Incorporated, and Citizens Bank. The Port of Providence is the second largest deep-water seaport in New England.

The city of Providence has the most coffee and doughnut shops per capita of any city in the country. WaterFire, an environmental art installation that consists of about 100 bonfires, takes place here every year. Tony Award-winning theater group Trinity Repertory Company is located in Providence.

Cranston, the second-biggest city in Rhode Island, was once known as Pawtuxet. Cranston was listed as one of the “100 Best Places to Live” in the United States by Money magazine in 2006. The city was carved out from a portion just south of Providence and north of the Pawtuxet River in 1754 and became a city in 1910.

Narragansett Park, the first auto race track in the country, opened here in 1886 as a horse trotting track. Cranston is home to the Budlong Pool, one of the largest outdoor swimming pools in the country, built in the 1940s. One of the oldest houses in Rhode Island, The Thomas Fenner House, was built around 1677.

Established in 1642, Warwick is approximately 12 miles south of downtown Providence. The first armed resistance against the British occurred here before the American Revolution, even before the Boston Tea Party. General Nathanael Greene, George Washington’s second-in-command, and Civil War General George S. Greene, a hero of the Battle of Gettysburg, both hailed from Warwick.

Warwick overflows with ethnically rich traditions, good food, and family-friendly beaches. Federal Hill in the historic Italian neighborhood is a can’t miss dining spot, although Warwick has many fine restaurants downtown as well. The Providence Children’s Museum and the Museum of Art at Rhode Island School of Design are located in the city as is Brown University. Warwick downtown is a dream for architecture enthusiasts, boasting Colonial, Federal, Greek Revival, and Victorian buildings. Strung out along the western shore of Narragansett Bay, Warwick has plenty of marinas, boatyards, seafood restaurants, public parks, and beaches.

Pawtucket borders Providence to the south and was an important center of cotton textile manufacturing during the American Industrial Revolution. First settled in 1671, Pawtucket is the birthplace of the Industrial Revolution in the United States, producing muskets, linseed oil, potash, and ships by 1775.

Pawtucket still retains much of its industrial base today. Goods such as lace, non-woven and elastic woven materials, jewelry, silverware, metals, and textiles are made here. Hasbro, one of the world’s largest manufacturers of toys and games, has its headquarters in Pawtucket.

The city has a thriving Arts District and is known as a center for arts and culture. Pawtucket is home to The Mixed Magic Theatre, Wage House comedy club, Pawtucket Arts Collaborative, and the Crooked Current Brewery. The city also hosts an annual citywide Arts Festival.

A post shared by The City Of East Providence (@cityofeastprov)

East Providence is located just east of Providence and is the fifth-major city in Rhode Island. The Plymouth Colony purchased a large tract of land, which today includes the northern half of East Providence, from local Indians in 1641 and named it Rehoboth, Massachusetts. In 1862, part of that land was ceded to Rhode Island and incorporated as East Providence.

Today, East Providence is a mix of small-town charm and an emerging metropolitan suburban community. The summers are nice, and the winters get cold, with a fair amount of snow and rain.  The top employers in the city are Santander, East Side Clinical Laboratory, and Athena Healthcare, Inc. East Providence is also a good location for those in the healthcare industries.

Woonsocket is the sixth-largest city in the state and the northernmost city, situated just south of the Massachusetts state line. It also makes up part of the Providence metropolitan area. CVS Health, a pharmacy services provider, is based in Woonsocket. Other prominent companies include the Landmark Medical Center, the Museum of Work and Culture, and the American-French Genealogical Society.

The town of Woonsocket was established in 1867 and incorporated as a city in 1888. The city has a strong business climate, affordable housing, quality health care, a skilled labor force, and a modern public school system. Landmark Medical Center, a full-service medical facility offering quality care for over 100 years, is located in Woonsocket.

The seventh-biggest city on our list, Newport is a seaside town on Aquidneck Island in Narragansett Bay. Founded in 1639, it lies approximately 33 miles southeast of Providence, only 74 miles from Boston, and 180 miles from New York City. Newport is Rhode Islands’ summer resort locale, famous for historic mansions from the Colonial era, and it has a rich sailing history. The first U.S. Open tournaments in both tennis and golf were held here, as well as every challenge to the America’s Cup from 1930 and 1983. Salve Regina University and Naval Station Newport, home of the United States Naval War College and the Naval Undersea Warfare Center, are based in Newport.  Many sailing clubs call Newport home, including the New York Yacht Club and the Ida Lewis Yacht Club.

Central Falls is a suburb of Providence. It has an area of only 1.29 square miles and is the smallest and most densely populated city in Rhode Island. The city was incorporated as a town in 1730. For a small town, Central Falls has many restaurants, bars, shops, and establishments to visit. The town offers residents a mix of urban and suburban life.

The town of Westerly was settled by English colonists in 1661 and incorporated as a municipality in 1669. Located on the south shore of the state, it’s a beachfront community known for its granite and stone-cutting industry. The pinkish Westerly granite has been used in numerous government buildings along the eastern seaboard. Because it’s a popular tourist destination, Westerly’s population nearly doubles in the summertime. Some of Westerly’s top beaches are Weekapaug Beach, Westerly Town Beach, Misquamicut State Beach, East Beach, and Watch Hill Beach.

The town was settled in 1661 and consists of numerous small villages. The Pawcatuck River Duck Race is held in April, the Virtu Art Festival in May, and Shakespeare in the Park in June. The Westerly-Pawcatuck Veterans Board of Control sponsors two of the oldest parades in the United States every year.

Newport East is the place to see many historic homes and mansions. The town has a thriving nightlife, and Newport’s Easton Beach is just a few-minutes drive away. Activities there include swimming, surfing, fishing, and more. The Newport Vineyards are close by for those who enjoy wine tasting. The restaurants in the area are known for amazing seafood.

How many cities are there in Rhode Island?

There are 39 cities in Rhode Island.

What is the most populous city in Rhode Island?

Providence is the most populous city in Rhode Island.

How many people live in Rhode Island?

Have you decided which city in Rhode Island is the perfect location for you? Regardless of which city you choose to move to, Rhode Island has plenty to offer, and you’ll find even more interesting towns that aren’t on the list. When you’re ready for your move to Rhode Island, our professional team of movers at Correira Brothers’ Moving & Storage can help. Call us today at 508-434-6683 to find out more about our moving services, or complete our Request a Quote form above to get a free moving estimate!

Providence, RI, has some of the best furniture stores out there. But trying to look through all of the different options can be time-consuming. With 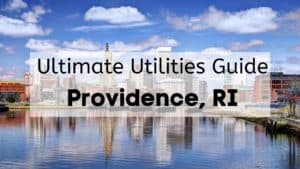 Thinking about relocating to Providence? Figuring out how to get utilities turned on in a new city is one of the first moving tasks you 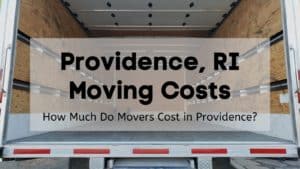